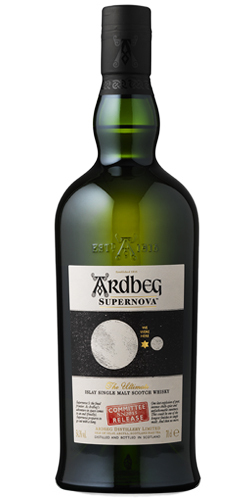 My first recollection of Ardbeg Supernova occurred in 2009, the year of its first release, during an interview between Whisky Cast and whisky writer Jim Murray. Murray  recounted his sensory experience with Supernova as intense, to say the least, but perfectly caught the moment when he described swirling his last sip in the mouth for a full 2 minutes, certainly much longer than most folks, during a walk from tasting lab to his home. According to Murray, the finish did not subside until sometime that evening. Ever since hearing this, I have endeavored to secure a bottle without success until last week, when I spotted the 2015 release of Ardbeg Supernova.

Throughout the years, there have been four total releases of Supernova. The first two, in 2009 and 2010 were matured in ex-bourbon casks exclusively, and represented somewhat the chief experience of Scotch whisky orthodoxy for peated Scotch fans given its extraordinary peating level of 100ppm. Since then, Octomore is the only whisky that exceeds this phenolic content. After a three year absence, 2014 saw Supernova with sherry finishing, however minimal. This is when the reviews got interesting, as folks seemed to lament that decreased phenolic attack as less then brutal (peat freaks are truly disturbing, and I know, I am one). And ironically, the leg breaking intensity of smoke now balanced with the underlying flavors became a negative one. Early reviews of 2015’s Supernova seem to hint at this. It’s unfortunate, as balance seems to be one of the chief quality markers of a good Islay whisky. Some quick particulars before we jump in…

This year’s Supernova is a blend of various single malts from Ardbeg’s warehouses, all possessing a phenolic level of 100 ppm vs the standard 55 ppm. These whiskies are included in the standard Arbeg releases but in limited fashion, and being that demand for those bottlings is sky high, future Supernova releases are discontinued, as the label notes this year is the final release. Of course, this isn’t true, we will see more Supernova’s in the future I’m sure. On to it…

Nose- Deep reservoir of peat notes. Rich smoke from a fire with roaring coals. Ashy and a big salty blast of sea. Like taking a log still smoldering and charred and smelling it. Fruit cake. Charred steak. Musk mellon and buttered biscuit.

Finish-Long with an initial burst of smoke and ash, naturally. Fruity with ripe berries, citrus and satisfying grains. Peppery intensity waters the mouth.

Comments- I have no thoughts comparing this year’s release with previous ones as this is my first Supernova, so I approached this as a smokier 10 yr old. With or without that frame of reference, I quite like this pour, and I have not been let down taste wise. Well overpriced I must say, but I tend to overpay for the white whales in my whisky world. Recommended for the experience.

Agree? Disagree? Let us know in the comments section below…