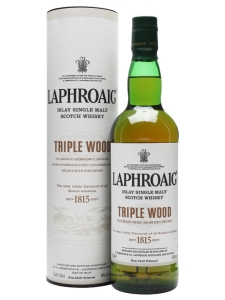 Whisky writer Dominic Roskrow remarked that marrying smoky, peaty flavors with sherry finishing is a tricky thing. He covered the Lahproaig line for his book 1,001 Whiskies You Must Taste Before You Die and mentioned this in his write up on Laphroaig Triple Wood. If we are talking about heavily peated whiskies it’s not hard to imagine the difficulty of integrating highly contrasted flavors such as sherry wine finishing. In my own experience, sherried whiskies with light peating tend to work very well, but not a lot of the reverse that I have tried. One comes to mind, Bowmore 15, which was a complete mess. Achieving a sublime balance of peat and sherry may ultimately be a matter subject to the taste of the drinker, and if so, who really cares. If you like it, you like it. Let’s look at one such example in Laphroaig’s Triple Wood.

Triple Wood is a single malt aged in 3 types of oak. Essentially Laphroaig took Quarter Cask, being aged first in ex-bourbon barrels from Maker’s Mark, then a quick trip through small quarter casks, and finally finished it for a short time in European sherry butts. This young, NAS malt is then bottled at 48% ABV and is non chill-filtered. Let us begin…

Comments- Interesting idea but unbalanced and disjointed. Flourishes of good things but overall not enough to justify the $30.00 increase over the 10 year. The Laphroaig that is most unlike the others.

Agree? Disagree? Let us know in the comments section below.