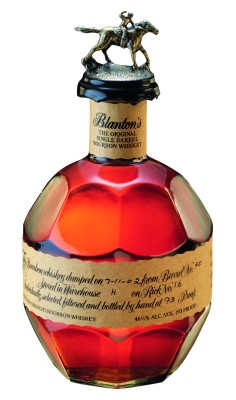 My bottle of Blanton’s Single Barrel sat undisturbed in the cabinet for about 8 months. I daily resisted opening it up and sampling the legendary spirit known throughout the bourbon lover community as a top shelf offering. I was saving it for the club, basically, and I was convinced I had a home run on my hands. I swear, nine out of ten Blanton’s reviews are simply glowing. But then we tasted it. On to some particulars first…

Blanton’s Single Barrel was launched in 1984 and overseen by the late Elmer T. Lee up until his death. Blanton’s is lauded as the world’s first single barrel style bourbon whiskey (usually a bourbon is a blend of a single distillery’s stock to achieve a certain flavor profile). Single Barrels can be a mixed bag in our opinion. They are one part marketing and the other part carefully selected gems. The “honey” barrels with the most exceptional qualities can be marked off and bottled separately for consumption. It can go either way, however, because not all barrels are as good as the other. You may get a less than desirable taste according to your own palate.

We have confidence in Blanton’s. The brand has all the qualities the connoisseur looks for: transparency from the producer, generally positive reputation and a provenance chock full of verifiable facts. I could even tell you what warehouse the whiskey came from, the barrel char level and the mash bill make up  (warehouse H, char level #4 with corn, rye and barley). But how did it do? On to the review…

Nose- Plenty of soft corn. Some vanilla hiding. Stewed fruit with blackberry. Subtle oak. Some clove and spice. Overall a bit on the weak side. Quite tame.

Finish- Starts off with a hint of fruit and grain but completely disappears into nothing fast. Short finish that goes nowhere.

Comment- Well, the bottle looks nice. Great cork, too. But with everything else, exception made for the taste, very disappointing. Maybe a bad barrel? Bad bottle? It happens. I don’t know, but the $60.00 juice in the glass just couldn’t take off and develop a strong identity. But hey, nice cork.

Agree? Disagree? Let us know in the comments section.